You Shine by Making Your Audience Members the Stars (5 Tools) 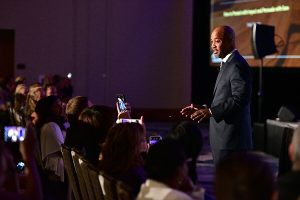 When you connect with one audience member, it usually does wonders in helping you connect with the entire group. I believe this is because, by pointing out individuals in the group, the group begins to realize that you actually see them as individuals and not as one large group. That’s the basis for a deep connection.

Here are 5 tools you can use to make that one on one connection and deepen your connection with the entire group:

Go ask one person a question. You’ll find that most of the tools on this list have to do with content. However, this tool has more to do with delivery because you physically approach one person in the audience and engage him or her in dialogue. I usually do this during my transitions from one point to another. It’s a great way to set up a new point.

For example, I often walk over to one person as if he or she is the only person and ask something like the following.

The personal touch of asking the question to one person helps also by keeping the rest of the audience members on their toes. After all, because I have asked one of them, others could think, “I might be next.”

By the way, that speech was delivered in Canada so I was glad they were okay with me poking some lighthearted fun at hockey. The truth is, regardless of whatever sport he named, I would have asked, “Any real sports?”

This one is rather obvious. Simply bring someone up onstage and have some fun with him or her. I ask for volunteers because I don’t want to select someone who might feel uncomfortable. Here’s an example of me bringing someone up and having some fun.

I make sure to give this person (in this case it was Jill) a prize and also compliment her for doing a great job before she leaves the stage. I also have the audience applaud for her.

Share a story about the person and either use his or her name or let the person self-identify if necessary. I usually use the person’s name if the story involves something that’s positive and helps the person look good in the eyes of the audience. However, if it could be perceived as negative, I withhold the name and let that particular audience member identify herself if she pleases. Usually the person does just that.

For example, here is a quick story I told about one of my audience members in Pennsylvania:

As you heard, she did self-identify and she was proud to have said what she said. This tool helped her become a star in my speech and we even stayed connected after the event.

Give one person dialogue and use his or her name. This tool might seem a little trickier than the others but it’s actually quite simple. All you do is state what one of your audience members is likely thinking and say it out loud as if she’s saying it to you. For example, after an activity in which I asked my audience members to change 12 things about their appearance, here is what happened during the debriefing. This was in Alaska.

As you could tell, this generated lots of laughter but what you could not see was how much the person I mentioned was laughing. She enjoyed it the most and she became a temporary star of the speech. When you connect with one, you connect with all.

User their names in a sentence. This is simple. All you need to do here is insert an audience member’s name into whatever it is that you’re saying. For example, I might say, “…but, Roger, what I realized from this, is that you master what you measure.” This is straight-forward, simple, and to the point. But make no mistake about it, this simple act of mentioning someone’s name continues to deepen the connection with your entire audience. Simple is powerful.

Final Thoughts on the Star-making Tools

When you find ways to connect with individuals in your audience, you automatically connect deeper with the group. Sometimes it’s because the group lives vicariously through the individuals and thinks, “How would I respond to that?” They also realize that you actually see them as individuals and not just as one big group.

I don’t care so much about the reasons; I just care about the results. The results are great when you connect one on one. When you make them the stars, you and your speech shine.

What are some ways you make your audience members the stars?

One year from now, how would you like to be 3 times better than the speaker you are today?

If so, visit my FREE program http://www.52SpeakingTips.com

In addition, if you are very serious about becoming a profitable professional speaker, make sure you visit my other FREE video program http://50speakingsecrets.com/. It’s half as long and twice as strong as the original tips. Together, both of these FREE programs can help you become the speaker others sign up and line up to see.