What Is The Quickest Way To Connect With Your Audience? 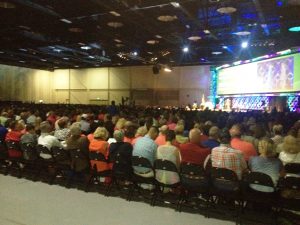 Getting ready to speak to 3,500 people in Tulsa, OK

The quickest way to connect with your audience is to share your failures, flaws, frustrations, and firsts. Why is this?

Lots of people don’t care for motivational speakers because they are used to hearing the kind that think a motivational speech should consist of bragging about their successes and then telling their audience members, “You can do it too!”

Well guess what? If you just speak on your successes and not about your failures, they will not believe they can do it. They’ll simply believe you can do it.

Don’t come across as Special

As a result, they will want that same special process and that’s why you will be able to influence them to take the next step towards getting it.  What I am saying is that when you lift yourself up, you let your audience down. Those who are driven by their ego when speaking will end up on a dead-end road.

Since I began to understand that there is power in pain, I started opening my speeches with various stories about my own failures. Here’s a quick story that I’ve shared with Toastmaster audiences over the years (94 seconds).

This works well because it throws my audience off and lets them think, “Hey, I can relate to that.” But here’s what else it does. When I finally share one of my success stories (which you should definitely eventually share in your speech), my audience actually cares! That’s right, when they know you’ve failed, they care when you’ve won. That’s the beauty behind sharing a failure story early in your speech.

Below are some examples of what I have shared over the years and hopefully they can help you search  for situations in your own life that you can dig up, dust off, and share.

FYI – I have also seen my friend and fellow World Champion Darren LaCroix literally show his first time on stage doing comedy. Believe me, when people see that video clip and then realize he went from that to a World Champion of Public Speaking, it gives them hope. Mission accomplished.

Think about the times you’ve failed, felt flawed, been frustrated, or done something for the first time that wasn’t anything to write home about, and then be courageous enough to open up and share it. People will not think less of you. In fact, they will think more of your process (the bridge) for how you went from where you were to where you are. Plus, they’ll think more of their ability to do the same. Just think; your failure can lead to their success.