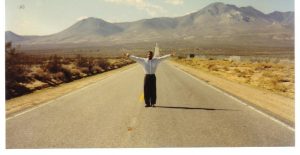 I never hitchhiked but I do suggest using hitchhiking humor

What is hitchhiking humor? It’s the humor you pick up on the way to your punch line.

Let me explain. Often I put a story together and I know what the punch line is going to be. However, at times, through testing, I get a laugh much sooner than I thought and in an area I didn’t expect. For example, the following story was to have the punch line, “Say some things!” That was the only funny line in the story when I first started telling it. But listen to the laughs again now even if you’ve heard the story before (clip is 1 minute and 9 seconds):

Initially the only funny line in the story was “Say some things!” Then, one time when I was testing it, I threw in the line about Denzel Washington and people started to laugh (I also tried a line about Flavor Flav but I took that out). As a result, I decided to punch up that Denzel line a bit by putting it in someone’s dialogue. People laughed more. So now I had two solid humorous lines of “Honey, Is that Denzel Washington?” and “Say some things!” But I didn’t stop there, because there was more hitchhiking humor to be found.

Over time, when I’d see people laughing at the Denzel line, I’d think, “Why are they laughing so hard? They must think I look nothing like Denzel (and they’re right of course).” So, during another test, I said the Denzel line and got the laugh and then looked at one person and said, “You didn’t have to laugh THAT hard.” People laughed more. So now I had three lines of humor in the story. I started off with only one (“Say some things!”) but picked up two more along the way and this is the essence of hitchhiking humor. I didn’t expect to find it but I did.

Then, over time, I even added another line AFTER my punch line when I said, “I was speechless!” and it got another laugh. What started out as a 45-second story with one punch line became a one-minute story with four humorous lines (1 punch line and 3 hitchhiking humor pieces). If you look closely, you can have much more humor in your stories than you originally imagined and this happens when you don’t rush to the punch line. There is some humor that might want to be picked up.

Too often speakers settle for the one humorous line they have planned but there’s usually another line or two that they can pick up along the way to make it even more enjoyable for the audience.

Here’s another quick example of hitchhiking humor. Listen first to the story (even if you’ve heard it before) and then you’ll see what I mean (Clip is 1 minute and 38 seconds).

The punch line of course was “That’s why I’m number one.” However, through testing, I found that people chuckled when I said, “With half an hour left in the flight he turned to me and said, ‘How ya doin’?!’’ So I started punching up that line by putting it in dialogue and giving it more emphasis. It generated a bigger laugh. I didn’t expect it to be funny but my audience told me it was so it became the hitchhiking humor I picked up along the way to my punch line. So now I had two funny lines.

Later, through testing some more, I found that my audience chuckled at the line where the guy said, “I didn’t want to be stuck talking to a boring person for five hours.” So I emphasized it a bit more (mainly through pausing afterwards and giving my audience a “Did he just say that?” look) and got a more pronounced laugh. That turned out to be more hitchhiking humor on the way to the punch line. Keep in mind not all the humor has to be gut-busting laughs. Chuckles are okay too. If you look for the hitchhiking humor, the bottom line is this:

The more you tell your story, the funnier it should get

Keep giving your story on a regular basis and make sure you record it every single time. It’s difficult to monitor the chuckles when you’re up there and, frankly, you shouldn’t be thinking about them. However, when you get back home and review the recordings, you can find possible hitchhiking humor from there.

Step 2 – Look for the chuckles

Keep in mind that, if you don’t emphasize certain lines, you might only receive chuckles at first. Remember this:

Look for those chuckles.

Step 3 – Punch up those “chuckle” lines

Test out your story again and see what happens when you emphasize those lines (often by putting them into a character’s dialogue, pausing afterwards, and/or giving an appropriate look) that initially generated the chuckles. Chances are you will uncover hitchhiking humor that you can use for that story’s journey moving forward.

Whatever you do, please remember this:

Your story is never done