Use Pocket Props to Make Your Audience TALL (Think, Act, Laugh, and Learn)

“You should use more visuals in your speeches.” What came to mind when you read that first sentence? Many speakers immediately think it means to use more PowerPoint or Keynote Slides.

While those may be valuable (when used well), you can also use other visuals to connect with your audience, uncover humor, and even evoke emotions.

I like to use pocket props, which are simply props that can fit into your pocket. I’ve seen speakers bring huge props onto the stage that take the attention away from the speaker. Pocket Props are good because you can use them and then hide them when you’re finished so that they no longer split your audience’s attention.

For example, take a look at the following video in which I used a small Pocket Prop that worked well in front of 4000 people at the PNC Arena in Raleigh, North Carolina:

The letter from my daughter was the pocket prop. Let me ask you a quick question. Don’t you think I know that letter by heart? Of course I do. It’s memorized. How could I forget it? So why do I still take it out and read it? It’s because the prop (the letter) benefits me in multiple ways:

The bottom line is that story would not work as well without the letter.

How Can You Get the Best use out of the Prop?

With props, I like to give what I call a “StoryWrap.” This means I simply wrap a story around the prop. This can be quite humorous. For example, here’s a video of me using a prop to tell a story (to an audience in Hong Kong) about something that happened to me in Vancouver, BC.

Once again, this prop helped make my audience curious because, when I walked up on the stage, I’m sure they were asking, “Why is he still wearing that name tag?” I teased them before I told them. Believe me, that story would not have worked very well without having the nametag as a prop.

I simply wrapped a story around the prop and it drew laughs. However, you can also use these Props to deepen your connection with your audience.

For example, I once spoke to Middle School kids and shared a story of how I was able to receive a pair of shoes from one of my basketball idols. I built the value and the importance of the shoes throughout the story. At the end of the speech, I gave one of the students that pair of shoes. It was an emotional moment because of the story that was wrapped around the shoes. Also, I REALLY wanted to keep the shoes!

Recently, the speaker I’ve seen use visuals the best is Manley Feinberg. It helps that Manley is a mountain climber. I coached Manley recently and saw some of his props that went very well with his stories and slides. He had a rope, a bag, a locking carabiner, an anchor, and even an admittance wrist-band from when he was bitten by a snake and taken to the hospital. All of these props were worked seamlessly into his stories and each item gained value because of it. 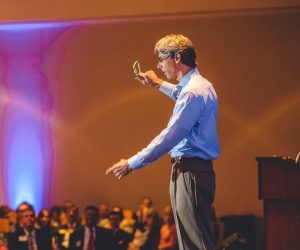 What I like the most is that Manley gives away some of his locking carabiners to his audience after his speech. In fact, after I coached him, he gave me one. Guess what was written on the side? VerticalLessons.com. That’s right, a well-used prop can even become good marketing for Manley or for you.

Your Turn – What’s a Proven Process for using Pocket Props?

Let’s just touch on that last point. Manley gave me a locking carabiner but I’m sure, by now, he knows that I will never climb a mountain. However, he uses the carabiner, rope, and anchor as a metaphor to show how you can support other people during their climb in life and that’s why the message becomes universal. It’s not just for mountain climbers, it’s for anyone on any climb. That’s why I keep his locking carabiner on my desk. It’s a reminder for me to “Keep others on belay.”

When using visuals, it’s important to think beyond slides and to dig into your own life and find items that are meaningful to you and can become meaningful to others. If it changed your life then it can touch theirs. Whether it’s a letter or a carabiner, it’s really a reminder of your message.

Okay, I’ve said enough. Now it’s time to go back to being the best daddy in my whole family.