Two of the Most Influential Words to Use as a Speaker 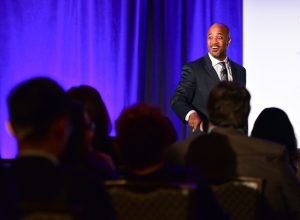 How do speakers become exceptional? They learn the tools necessary to prompt their audience members to go beyond listening and to take action. Using these 2 persuasive words in speaking will help you do just that.

The two most influential words are…

Listen to the following 27-second clip in which you’ll hear the two most persuasive words in speaking.

Those are a couple of lines I have used in one of my keynotes for many years and they usually resonate deeply with my audiences. Why? This is because of one very important understanding we must have as speakers:

“Most people do not want to be most people.”

The words “most people” are extremely influential because, if used correctly, they immediately create a comparison between something the audience does not want be (or have) to something they do want to be (or have). For example, once they get the message about “most people living on get-set,” they immediately want to avoid being placed in that category. Then the key is to give them a way to avoid it.

Look back at the first sentence of this post. What does it compare? It compares average speakers to exceptional speakers and then gives you a way to be exceptional.

In speaking, you want to create a bridge between what the audience doesn’t want (to be average) and what they do want (to be exceptional) and then let them know the way to cross that bridge (i.e. 3 keys, 4 steps, 5 Cs, etc.). This is a wonderful way to set up your message because you’re heeding the following valuable speaker advice:

“Tease them before you tell them.”

Questions for you for your next speech

What do MOST PEOPLE do that your audience should avoid doing?

What aren’t MOST PEOPLE doing that your audience should be doing?

Is it always Most People?

No, it’s not always most people. It could be most engineers or most home-owners or most financial services professionals, etc. Customize it to address your specific audience.

NOTE: If you don’t feel comfortable saying, “Most people,” you can say “Many people.” However, that will lose some of its power. Why? Because that sounds like something most people would say.