A quick and easy way to uncover humor is to compare and contrast two stories, examples, statistics, methods, or pretty much anything else. I like this tool because the audience tends to laugh AND learn at the same time. You can use it for dramatic impact (like I do in many of my stories) or you can use it for humor. I call it the “Right vs. Ridiculous” Process. Let’s explore two examples (in audio).

Listen to this quick 64-second clip of me contrasting the way I get my in-person audiences to subscribe to my www.52Speakingtips.com site.

For example, if I started that module by saying, “Raise your hand if you’d like to receive 52 emails from me,” there would have been some confusion and probably some nervous chatter/laughter. However, because I mentioned the right way first (putting the result before the resource – “becoming 3 times better…”), my audience understood just how ridiculous that second way (putting the resource before the result – “52 e-mails from me”) really was.

This is similar to the law of contrast in pricing that I mentioned in my Back of the Room Sales Home-Study Course. When you put two prices against each other, the higher price makes the lower price seem even lower. Let’s say I first mention that my program (with all the bonuses) is worth $397 but today you get it for $197. Well the $197 now seems lower than it would have had I not first mentioned the $397. The right vs. the Rdiculous has the same effect. It makes the ridiculous seem even more ridiculous and that’s funny.

Like I mentioned, contrasting can also work for drama or an escalation of your conflict. Listen to this quick 76-second audio of how I put two numbers side by side for dramatic effect. This is a short section of a story of when I was hired to give a speech and how excited I was to finally get a nice payday.

Here’s the key to why the drama worked. It’s because I put the numbers right next to each other. I said, “She tucked into my jacket pocket a check for $3,500.” Then I immediately told them I gave the audience a “$150 speech” and you could hear their reaction.

If I never mentioned the $3,500, they would not have thought anything was wrong but, since I mentioned it, they could easily realize I blew the engagement badly.

Quick never-before-told secret: I believe in this side by side contrast so much that I reworked that sentence (“She tucked into my jacket pocket a check for $3,500”) many times just so I could place the actual dollar amount at the very end of the sentence. Why? This is so the $3,500 would be closer to (and fresh in my audience’s mind) when I mentioned the $150. I want those two numbers as close together (time-wise) as I can get so that they’re essentially side by side for effect. Very shortly after I mention the $3,500, I mention the $150.

This just goes to show you that contrasting can be used for humor and drama. But let’s get back to humor.

Your Turn for Right vs. Ridiculous Humor (3 steps)

Step 1: Think about a “right” process that you have.

Step 2:  What would be the wrong process that some people might use?

Step 3: Put them next to each other but make sure you mention the right way first.

I believe you’ll surprise yourself by how much humor you can uncover there. It’s quick and easy.

Back in 1998, the first 10 speeches I gave had absolutely no humor. Today I get booked because of my ability to mix a message with amusement. How did I start adding humor to my speeches? I didn’t. Instead of adding humor, I uncovered it.

If you’ve ever wanted to keep your audience laughing throughout your speech, then you will want to access the 33 humor tools in my newest course called Humor Speaking Secrets. You’ll uncover more humor than you ever knew you could! Stay tuned for an e-mail announcing how to access it on December 4th 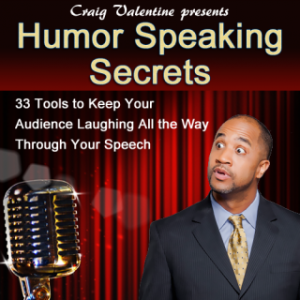