The Power of the Relative Result 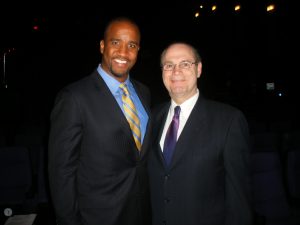 With Dr. Tony Alessandra - a man who knows how to reach people where THEY live

After studying influence and implementing ideas successfully for more than a decade and a half, I thought I knew a lot of what there was to know about getting people to take action. However, one of the most important ideas I ever learned I picked up only a couple of years ago. It’s a tool that will excite your audience to act on your message. It’s what I call the Relative Result.

Why will the Relative Result work for You?

Click the audio below and listen to this very quick audio of me getting my audience to take the next step.

How many times better can you be one year from now?

Did I just say you’ll be a better speaker? No.

Did I just say you will improve? No.

I said you’ll be three times better than the speaker you are today. In other words, I gave what I’ve come to call a “Relative Result.” This is a result that’s based on where you currently are today and how much better you can be tomorrow. The Relative Result I used for 52 Speaking Tips has brought me more prospects and customers than even I imagined. Why? Because I’m not offering tips or an arbitrary number. I’m offering a way for you to be 3 times better than you are today. That’s why so many people took action on it.

The Mistake Most Speakers Make

What most speakers do is they pick an arbitrary number for their results such as “You’ll be able to close 40% of your audience on making an appointment with you.” So what happens to the person in the audience who is already closing 45%? How will your result benefit him or her?

The “close 40%” result is a number that’s not related to where your audience member currently is. What would be better is if you said, “You’ll be able to close twice as many people than you’re currently closing.” That’s a relative result, and it becomes more real to your audience member. Why? They can feel what doubling their closing ratio will do for them because they know it will bring twice as much of everything they currently have.

Staying with this closing ratio example, the audience members can feel what it would be like to double their closing ratio by thinking of…

They can feel it because it’s based on where they currently are.

The Most Important Reason to Use Relative Results

The most important reason to use a Relative Result is…

It automatically meets each audience member where he or she lives.

However, the speaker could say, “You’ll be well on your way to doubling your income within one year once you implement these tools.”

Why? Because relative results hit you where you live.  That’s the beauty of it.

One of my goals, which I borrowed from Alex Mandossian is, “To turn my annual income into my monthly income within 36 months.” Alex has suggested that goal for his Teleseminar Secrets clients and he has many clients. So you know what that means? We all have different numbers, but we still all have the same goal. That goal hits us where we live because we know our base of what we currently make.

Arbitrary = No Emotion and no Connection

Audience members can’t feel emotionally what an arbitrary number like “closing 40% of your audience” will do because it has no basis in their lives. It’s not (to use a textbook industry term) activating their prior knowledge. But doubling or tripling can be felt because there’s a base with which to start. What you heard me say in my audio is “you’ll become 3 times better than the speaker you are today.”

In my audience members’ minds, they’re probably thinking that means…

There are many ways they can feel what three times is because they base it on where they currently are and then simply multiply that by three of everything.

Caveat: Make sure you are conservative in your results. I don’t say you will be “Twenty times better than the speaker you are today.” I say “Three times better” because I have witnessed people I coach become at least three times better and get way more than three times the engagements, testimonials, etc. In other words, make sure the tools you have can deliver on that result (if they actually implement the tools).

This is Great for Your Own Goal-Setting Too!

To dive slightly off topic for a moment, this idea of Relative Results is something I suggest integrating into your own goal-setting as well. Instead of picking arbitrary and baseless numbers such as “I’m going to make $100,000 this year in product sales,” pick a relative result such as, “This year I will triple my product sales income over last year’s.” Of course, when you write your goal, you can put the actual numbers in as well. So it might be, “This year I will triple my product sales from $50,000 to $150,000.”

One of the goals I set last year was, “I will double my number of leads (prospects) by March 31st.” Of course I included the actual numbers in my goal as well. But check out what happens when I say “Double my number of leads.” I stay fired up from the goal because it lets me know that, every time I send out an offer to my leads, I will bring in twice as much income as I did the last time I sent out that offer.” See how that works? I just double everything in my mind and that’s what keeps me fired up! It’s beautiful.

How Can You Make Relative Results Work for You?

It could double your income

It could triple your closing rate

For your very next speech, give your audience a Relative Result whether it’s doubling something, doing something in half the time, or whatever result you feel you can offer with integrity.

I’m interested to know. Have you ever offered a Relative Result? If so, what was it?