The Much Needed Formula that Makes Your Audience Want More 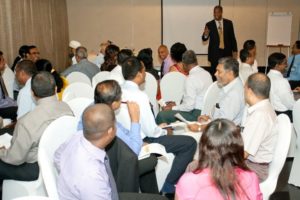 Speaking to Executives in Sri Lanka

Over the years I’ve realized there is one formula that most speakers rarely use that, if they used, would keep their audiences hooked and hungry for the entire presentation. It doesn’t take long to put into place but it has a very long-lasting effect on the audience because it makes them constantly say, “Tell me more!”

Would you like to know what that formula is?

“Tease them before you tell them”

Tease Them Before You Tell Them

When I say, “Tease them before you tell them,” I mean find ways to make your audience want to come along on the next part of your journey whether that’s your next story, activity, or point. Too many speakers just tell their point. You have to tease them first or they won’t value it as much and they won’t want it as much.

Here are five quick audio examples (from my live speeches) of the multiple ways you can “tease them before you tell them” and keep your audience hungry for more. Play the first audio now.

As you could hear, before I even dove into my story, I teased my audience in a few ways. Because of my set-up, here are some of the questions my audience members might have had for me:

I even had one audience member say to me, “What kind of score did you shoot that day?”

The bottom line is my audience is curious and that’s a good thing. It’s good to put more than one piece of curiosity in the Tap if you can. Find ways to tease them before you tell them. If you just tell them without teasing them, they won’t value it as much.

Have you ever watched The Flintstones? Remember every now and then Wilma would cook for Fred and Fred would literally see this visible aroma (it looked kind of like smoke) floating out of his house? What would he do? He’d literally follow the stream of smoke (or aroma) until he reached the origin. By then he was extremely excited to eat his Brontosaurus Burger and he valued it more.

Think about that when you put out the next piece of content you want your audience to enjoy and digest. Click the next audio and hear another kind of tease you can use.

The tease started when I said, “There’s a relationship that a lot of people need to have that they don’t have.” What question does that spark? Hopefully people wonder, “What relationship is that?”

But I don’t stop there. I then use more questions to evoke laughter and give my audience a hint to where I’m going. I’m just trying to find ways to pull them in before I get to the story. Asking questions like the ones I asked about Lancaster can attract them with humor.

Hopefully the question they ask about Lancaster is, “Well, what the heck happened to you over there?” The answer is given in the story but the key is they want to go on that journey with me. Why? Because of the tease.

They also know there’s a story behind that statement, “I’m black…but let me tell you how I found this out.” They laugh but they also want to hear the story. Set it up and then let them in.

I could have easily gone straight into giving them the tool without teasing them. However, couldn’t you tell from their response that they really wanted it? When I asked, “How would you like a tool you can use to make a deeper connection with your audience than you’ve ever felt before,” you could hear how emphatically they said, “Yes!”

What’s most important about this type of tease is I “Sold the belief before the relief.” In other words, I sold the belief that when you’re in speaking, you’re in sales. I got them to agree with me on that first before I sold them the relief of how to sell, which is the formula they were about to pick up. So, at times, see if you can get agreement on a belief before you sell them on the relief (the process or formula they can use to make that belief work for them).

Finally, listen to this last audio example. It comes at the end of my speech when I’m wrapping up the message. It’s short but powerful.

Keep in mind, hopefully at that point in my speech, my audience has already grabbed hold of some very valuable tools they can use to get remarkable results in business and in life. So when I say that there’s one word that’s more important than everything else I’ve said combined, that should peak their interest. I can see it in their eyes that it does. Once they are ready for the message, I give them the final story with the message.

Mix It In Throughout Your Speech

It’s important to “tease them before you tell them” throughout your entire speech. It’s not just the beginning when you’re setting up your message. It’s not just the end when you’re wrapping up your message. It’s sprinkled throughout your entire speech. It’s not an ingredient that should just be lopped on top but it should be mixed inside so that’s it’s barely noticeable but absolutely invaluable.

How can you practice this? Take these 3 Steps

Step 2: Ask, “What would make my audience want to hear this?” “What will really make them hunger for this content?”

Step 3: Test out a few lines in front of a live audience like Toastmasters and then tweak your teases until they have the desired effect.

Don’t make the tease last too long. If you work on it, you can tease them in a few short sentences and have your audience hungry to hear the rest. If you tease them for too long, that can really get on your audiences’ nerves. Find the balance but error on the shorter side. Keep the speech moving along.

What are some ways you tease them before you tell them? Feel free to write out your examples word for word. I’d love to see them!