The Crescendo: An Underutilized Tool for Speakers 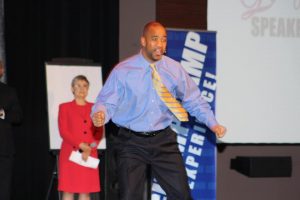 Many speakers tell stories that have some ups and downs and maybe even good emotional twists and turns, but they don’t often reach a crescendo.

Crescendos are so important because they are defining moments that bring the audience’s energy to its highest point. Without them, your audience can easily be deflated.

Dictionary.com defines crescendo as “a steady increase in force or intensity” and “the climactic point or moment in such an increase; peak.”

I look at it as the highest peak of intensity or force with your story. However, to have a crescendo, you must build to it gradually. That means you can’t jump to it too quickly and you can’t take too long to get there. There needs to be a gradual increase in excitement, intensity, or force so that it seems quite natural once you hit the peak.

Listen to the following example of my 2-minute car story in which I gradually reach a crescendo.

What was the highest peak of force and intensity? Right, when I yelled, “Where do I sign?!” That was the crescendo, but that’s not enough. You can’t stop there.

What happens after the Crescendo?

What happens after the crescendo is just as important as the crescendo itself. The key is to bring down the force and intensity (gradually or immediately) afterwards and shift your energy in a way that says, “Okay, let’s get back to our conversation.”

After I yelled, “Where do I sign?” I gradually brought the level of force down and eventually became conversational again when I said, “Don’t sell the product, service, idea, or yourself; always sell the result.” In truth, I could have shifted the energy even more and dropped my voice to a low and slow level when I said that line. Why? Because even though you gradually reach your crescendo, you do not have to be gradual on the way back down. In fact, the immediate contrast can often pull your audience in deeper.

I chose to go down gradually because I still had some humor lines (i.e. “And he lied!” and “Just me and my payment”) on the way back to the conversation.

A Crescendo in 3 Steps

Step 1: Build up your level of force and intensity gradually

Step 2: Have the defining moment and reach the highest peak of force and intensity

Step 3: Shift your energy (gradually or immediately) and bring yourself back to a conversational level

Do you have a story that builds into a definite crescendo? What do you do afterwards? What kind of energy shift do you make?