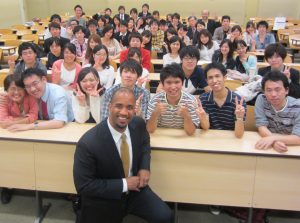 With an amazing group of students at Meiji University in Tokyo

Recently, at a speech to university students in Tokyo, Japan, I asked my audience a question and nobody responded. Instead, the students looked at me as if they wanted to respond but could not.

So what did I do? I went to the method that has never failed me for as long as I’ve been speaking. I call it the Discuss and Debrief method. By the time I finished the workshop, the students were as energized and participative as any audience I’ve had.

What is this method and how does it work?

The Discuss and Debrief method requires only two steps.

Step 1 Discuss: Have your audience members turn to their neighbor to discuss something.

Step 2 Debrief: Ask your audience, “Okay, what did you come up with?”

You can be sure that your once reluctant audience will now shoot answers out at you from all angles. Why? Because of the following reasons:

Reason two:  You gave the audience oil. This simply means you gave them the time and energy necessary to loosen up their minds and think on the topic.

This method is so important because of the life and business-changing advice I learned from Tom Hopkins years ago. He said something to the effect of, “If I say it, they can doubt me, but if they say it, it’s true.” In other words, get your audience to say your message and they’ll find your message to be valid.

Plus, there’s another very important reason to use this Discuss and Debrief method. “People buy into what they help create.” In a sense, your audience is helping to create your message and therefore they’re more apt to buy into it.

Finally, in Bob Cialdin’s classic book called Influence, he talks about a persuasion principle called Consistency. This law has driven my speaking for a long time. I lean on the law all of the time and the public nature of Discuss and Debrief fosters it. Here’s what the principle states:

“Once a stand is taken, there is a natural tendency to behave in ways that are stubbornly consistent with the stand.”

In other words, once your audience makes a public declaration of what they picked up from your presentation, they will not then go back home and think, “I didn’t get anything of value.” Instead, they will be consistent in thinking and knowing what they publicly stated they received.

I can’t overemphasize the importance of getting your audience to publicly reiterate your message and let others know what they got from it.

When can you use this method?

If you have been receiving my newsletters for a couple of years than you know I use this method towards the end of my speeches as a review of the content. That’s right, instead of me reviewing my message, my audience does it for me. This is effective because it proves to them (and to the meeting planner) how much they got from the speech.

However, I also tend to use it after every major section of my speech. For example, if I’m giving a keynote with 4 major points, I will do a quick Discuss and Debrief after each point. Keep in mind they will have picked up minor points and side-points as well as the major point. Plus, they often shout out not just what they heard but what they will do with what they heard. You will want to consider using this method a few times per speech, especially if your speech is more than 30 minutes long. If you’re doing a half or full-day training session, you should consider using it after each 75-minute section.

You can also use this message when you do not get a response similar to what I did in Tokyo. I quickly switched to the Discuss and Debrief method and responses came flying out. In fact, with one audience in Japan, I had to jokingly say, “Okay…stop answering!” The audience laughed and loved it.

How does this differ from Think, Pair, and Share?

Some friends of mine use a tool called Think, Pair, and Share, which is also effective. In it they use three steps:

Step 1: Have your audience members think and write down what they think about a topic.

Step 2: Have them pair up with a partner and talk about what they wrote.

Step 3: Have them share their thoughts with the entire audience.

Think, Pair, and Share is effective, but I prefer Discuss and Debrief for a couple of reasons.

Reason one: It’s quicker. Because I don’t initially have my audience write down their thoughts, I save those 2-3 minutes and keep the energy high and the program stays on-rhythm. To me, energy and rhythm are two of the most important factors in having a strong audience connection.

You can’t create a message without first creating a mess. If you look at the word message, it’s really just a ‘mess’ with ‘age.’ It’s a mess, that, overtime, becomes a message.

True collaboration and the quickness of the Discuss and Debrief method make it preferable for me. Try it, it works. It always works. Now turn to someone and discuss one idea you got from this post. Okay, now post your response.