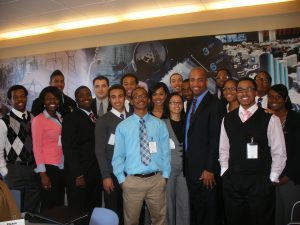 Whenever I speak to the youth, I end up being the one who gets inspired! Tulsa, Oklahoma

What is seeded spontaneity? It’s a way to uncover humor by creating a seemingly spontaneous moment that is actually planned. Here’s how I do it. I plant a question or statement that I know will get my audience members to reply in a certain way. Once they reply, I simply reply with my planned funny line.

The best way to understand this is to listen to a quick example from the middle of one of my stories. Click the player below.

The question is the seed and I know someone is going to eventually reply with, “Where are you going?” because that’s what people always ask on planes. My reply is prepared and it works everywhere. Once I hear “Where ya goin?” I say, “Hopefully we’re going to the same place.” It seems spontaneous but I planted that seed with the question and knew it would blossom with their reply.

Then I added two tag-on lines about dropping me off over Santa Clara and got two more softer laughs. I love this type of “Seeded Spontaneity” humor because my audience is involved in generating the laugh. People buy-into what they help create.

Here’s another example of planting a question (seed), knowing the response I will eventually get, and replying with a humorous line.

Did you catch what I planted there? I was waiting for someone to say “Procrastination” so I could reply with, “Yes, procrastination…it took you a while to answer.” Usually this happens sooner but what happened in this particular audience? They weren’t saying it! Finally I baited them into saying it by starting the word “Pro…” and they finished with “Procrastination.” They still laughed but it works better when I don’t have to bait them.

So why did I share that particular clip? Because there’s a secret here. This is the dirtiest little secret I have in speaking and, frankly, I should be ashamed…but I’m not. Ready. Here it is.

I don’t have to wait for someone to say procrastination, because I know someone is thinking it.

If they think it, I say it

So nowadays, if nobody says it, I just say, “Did someone say, ‘Procrastination?’ Wow, it took you a while to answer.”

Make Sure It Makes Sense

There’s one situation in which this particular seed will not grow into humor. Can you guess what that is? It’s when someone yells “Procrastination” right away. That won’t work because I can’t say, “It took you a while to answer” when they answer immediately. Get it? So all of these calculations go into what I’ll do and when I’ll do it. It generates lots of laughs when you use seeded spontaneity and it makes your audience a co-creator of your speech. The good news is you can do it 10 times during a speech and it won’t get old. Remember, people buy into what they help create.