Rhythm – Do Not Go Into Your Next Speech Without It 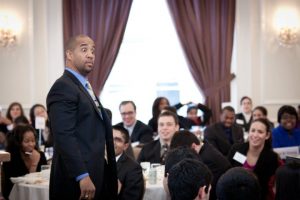 With students at the University of Pittsburgh

Years ago one of my coaching said to me, “Craig, you have rhythm when you speak. How can I get rhythm into my speeches?”

I have to admit, at the time, I was stumped for an answer. I really hadn’t thought much about it. However, a few months later, it hit me. Speaking is certainly a lot like music and there is a rhythm to it.

There is also a major benefit to having rhythm in your speech. Can you guess what that is?

It makes the speech more memorable!

Think about it, aren’t there some songs you haven’t heard for years but, if you heard them today, you would remember the words? That’s because music has that kind of power. Speaking can have a similar power if it’s rhythmic.

Every now and then I receive a phone call or e-mail that says something like the following: “Craig, I saw you speak 10 years ago and I remember you said, ‘People buy-into what they help create.’ Well, I need some buy-in from my staff so I want to bring you in to speak.”

Believe it or not, the repetition and the rhythm behind the points I drive home have a lot to do with why my past audience members still remember them.

When I was in middle school, I remember our music teaching showing us how to put a song together. Today I look at speaking in a very similar way.

Don’t get me wrong, I am not a musician nor do I pretend to be. However, the way a very simple song is put together has similarities with the way a speech can be put together.

Here’s what I remember about the structure of a song. It’s what is regularly called the AABA form.

Now let’s look at the way a keynote speech can be put together compared to the song.

Verse A  – This is the second story of your speech

Bridge – According to Wikipedia, in music, the “…bridge is a contrasting section which also prepares for the return of the original material section.”

In other words, it is not the same as the verses but it gets you back to the verses afterwards. What does this mean for speaking? I strongly suggest at this point that you depart from your stories and head to something different like a short activity, some questions for your audience, a discuss and debrief, or something that will change the rhythm of the speech.  This keeps your audience on their toes and energizes them.

Verse A – Once you’ve transitioned back from the bridge, you can tell your third story.

Chorus – This includes call backs to the Foundational Phrases from your three stories. When you repeat these phrases, it’s similar to the repetition of the chorus. Aren’t there some choruses you can’t get out of your head? Guess what? By repeating your Foundational Phrases throughout the rhythm of your speech, you will make them stick.

The Other Key to Having Rhythm when You Speak

Here’s the biggest key I learned for having rhythm w:

I’m consistently reminded of something I read years ago that, through research, I found was said by Claude Debussy,

“Music is the silence between the notes.”

Later, through reading Deepak Chopra and others, I learned

“Without silence between notes, music would simply be noise”

I’ve always thought about those quotes related to speaking. So often speakers are worried about what they’re going to say. We need to also be mindful about when we’re going to be silent and let the rhythm speak.

For example, here is one very 43-second piece of a story I tell about a speaking hero of mine. Listen for the silence:

Welcome back. Did you hear it? There was a long silence between my notes and this affected my speech in several ways.

Silence built all of that up with the rhythm. Truth be told, the silence also allowed my movements to speak but, of course, you can’t see that through this audio clip.

One of the big problems with silence is that many speakers are afraid of it. They’re afraid their audience will tune out or think that they have forgotten the speech.

In fact, think back to the silence you just heard in that audio. In a DVD I put out years ago that includes that same story, the videographer edited the video and took out those several seconds of silence! In other words, he removed that moment! I couldn’t believe it! I wanted to say, “Are you kidding me? That’s one of the most important parts of the story. That’s the let-down moment!” After all, I want music, not noise. So I had him put it back in.

The takeaway is to not be afraid of the silence. It will only give your speech the rhythm it deserves and provide your audience with an experience and a message they won’t soon forget. After all, you don’t usually forget what you experience.

What’s a moment in your speech that can use more silence? I challenge you to include that silence the next time you deliver that piece.

Speaking of silence, this is how I ended my world championship speech nearly two decades ago.