Move your Audience by Moving on Stage 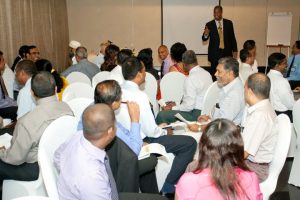 Craig Valentine speaking to 50 CEOs and Executives in Sri Lanka

Many speakers give absolutely no thought to how they use the stage. They are missing out on a grand opportunity to pull on the audience’s emotions, clarify their message, and paint a lasting picture in the minds of their audience members.

For example, at the end of my speech, while I say, “…and just like Jermaine Williams Jr. would not let go of his old ways…” I also hand-gesture to the spot on the floor where I originally told that story. When you do this, you’ll evoke much more emotion in your audience because they will still “see” the story (happening in that spot on the stage) in their mind.

Also, make sure you remember the number one reason for moving on stage.

“Let the action in your story prompt your movement on stage.”

When something happens in your story, relive it on stage. For example, if you use the line, “I rushed over to my daughter’s room to see if she was okay,” don’t just stand there, rush! Look panicked! Move! Do as the story tells you to do. Do as you did when it really happened. Relive it. Let the action drive your movement on stage. Again, this means you’ll have to designate the spot where her room is represented on stage so you can rush over to it.

Remember that speaking is a series of scenes. If you’re not in the scene, you won’t be able to bring us into it.

How else can you use the stage?

In the USA and many other countries where we use English as our first language, our timelines move from the left to the right. However, as a speaker, we must do it backwards (right to left) so that it’s correct for our audience members. Therefore, you should move to your right (the audience’s left) for the past, and keep moving to your left as you enter the present and the future. For the audio you just heard, I started to my right when I joined Toastmasters, moved to the center when I got my CTM, and moved to the left when I won the World Championship. All of this movement was subtle but significant.

The good news is, because I have set up the spots, now I can call back visually and verbally to them. For example, towards the end of my speech I can easily walk back to my right, point to that spot in the past and ask, “But what if I had never joined Toastmasters?” Then I can look or gesture to my left (the future) and ask, “Where would I be today?” That’s powerful.

Using the stage takes practice? Don’t be like so many speakers who think they can “wing it.” Why? Because you don’t want to make these movements obvious. Instead, make them subtle. Take just a few steps in one direction to separate the past from the future. Don’t move all the way across the stage. Take a tiny step forward to drive home your point. Don’t take several steps away each time a new character is talking. Make it all subtle otherwise it will distract from your message.

“The key is subtlety on stage”

It’s up to you how you use the stage, but just don’t forget to use it intentionally. Moving on stage can help move your audience to action.