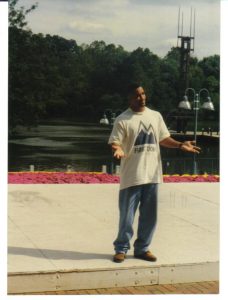 Long before I ever officially became a speaker, I was already practicing like one

Note: Make sure you join me below (in Mistake Number 5) in one of my rehearsals!

Mistake Number One: They rehearse in front of a mirror

You want to make rehearsal as realistic as possible. In your real engagement, will you be looking at yourself in a mirror? No, you will be looking at the audience. Hence, in your rehearsal, it’s important to look at your imaginary audience and not at a reflection of yourself. Plus, it’s not about you. It’s about them. You can either look at your own reflection or get the audience to reflect, but you can’t do both. Hopefully you’ll choose to do the latter.

Overtime you will find areas of your speech where you say a line and get a specific response from your audience. For example, I often ask the question, “What is the number one barrier standing in the way of most people living their dreams?” I know that eventually I will hear the response, “Procrastination.” By practicing my response to this response, this is what happens (listen to this very quick audio – 20 seconds).

The first time I responded in that manner truly was spontaneous. However, when I do it now it is planned. This is a secret you will want to write down and internalize.

What was unplanned in the past becomes planned for the future

That “took you a while to answer” line seems spontaneous and it connects me to my audience but it is definitely planned, and I rehearse it as if the audience is really there with me shouting out answers including the one about procrastination.

I believe my most important rehearsals are with my eyes closed envisioning the entire audience and the environment as I mouth the words and go through all of the feelings in the speech. In other words, I visualize the speech as if I’m up in front of the audience from my point of view.

Back in 1999, when I was headed to the World Championship of Public Speaking contest, a friend of mine brought over some videotapes (remember those?) of past championship contests and he said, “You’ve gotta watch these speeches?” I said, “For what? Nothing can make me work harder than I already am so why should I watch them?” He said, “Don’t watch them for the speakers; watch them so you can see the environment in which you will speak.” That made perfect sense to me because I am big on visualization so I watched them and I’m glad I did.

I was able to see the two large screens on either side of the stage as well as the lighting and it allowed me to picture myself on that stage in front of the audience. Many of my future rehearsals were done with my eyes closed envisioning that scene.

I believe rehearsing in this manner quickens your connection with your audience because you will already feel at home as soon as you reach the stage. After all, you will have been there many times.

Mistake Number Four:  They always start from the beginning

Here’s what happens to many speakers. Let’s say they have a 30 minute speech. They start rehearsing and, after about 10 minutes, they get interrupted by life. They stop rehearsing. Then, once the interruption is over, they go back to rehearsing but guess what they do? They start over again at the beginning. Overtime they’ll go over the beginning way more than they’ll go over the middle and the end. As a result, they’ll have what I call a Slope Speech. It starts off on a high and slopes downhill.

What I suggest is that you practice in modules. For example, I have my 4 Rs to Remarkable Results 45-minute keynote. I will practice one R (one module) at a time. That way I keep myself fresh with my rehearsal and I don’t burn myself out. I make sure each R gets equal treatment. For example, I might start with the first R early in the day.  Then, later that day I’ll go to the next R. Later still I’ll go to the third R and then finish later with the 4th one. I’ll do the same routine the next day and each day leading up to that event.

The other benefit to the modular approach is, if your time gets cut, you can cut one of the modules but the others will still be in tact. For example, if they only give me 30 minutes, I’ll just do 3 Rs to Remarkable Results but they’ll each still be powerful because they’ve each been worked on equally.

What many speakers don’t realize is that movement helps with the internalization of their message.

For example, if I move to a certain part of the stage to address a character in one of my scenes, that movement helps me know exactly what to say to that character. When I step out of a scene and approach my audience, that movement reminds me to change my volume and pace as I deliver the point. Movement helps your memory. That’s why, to this day, it’s more challenging for me to do a “behind the podium” graduation address than it is to move freely around the stage in and out of my scenes. There’s something to be said for muscle memory improving your message memory.

Here’s an Invitation to join me in my rehearsal

Listen to the following quick clip (75 seconds). First what you’ll hear is me rehearsing part of one of my stories. Picture me moving to where the golf cart is on stage. Listen for the long pause I give where I will expect the laughter. I’m making my rehearsal as realistic as possible as if my audience is really there.

Then, once you hear the drum, you will hear me delivering that same material in front of a live audience. Hopefully you’ll see how the rehearsal prepared me very well for the real event. Take a listen.

What you could not see were my movements. The same movements I had in practice, I did in the real game.

There is one other huge mistake some speakers make when it comes to rehearsal. They don’t rehearse! They make statements like, “I’m better when I don’t prepare.” I believe that’s a cop-out. It’s a way for them to talk themselves out of doing the necessary work in order to succeed in speaking. The sad news is they will never know how good they can be unless they decide to rehearse.

Twelve years ago a gentleman in Taiwan asked me, “How long will I have to practice before I become a great speaker?” I said to him, “Believe you are a great speaker now, and then go and practice like one.”