The Back to Back Storytelling Method for Influencing Your Next Audience

Using two stories back to back is often a very effective way to influence your audience, especially if one story represents a “don’t” and the other story represents a “do.” Why? It’s because the contrast in the stories helps to make the “right way” decision clear. In this video (from all the way back in 2010), I use two stories back-to-back to make one clear point. Check it out and then we’ll debrief.

Which person do you want to be more like, my speaking hero or Martin Sheen? Sheen offered the right way and my speaking hero offered the wrong way at least in my opinion. Contrast is an extremely important and influential part of public speaking. You can use the Back to Back Story Method to contrast…

I liken the Back to Back Story Method to taking a picture. In one of my speaking bootcamps, I once had a student (a former NBA All-Star) who stood 7 feet 4 inches tall. In that same bootcamp, one of my students (a university professor) barely reached the 5 feet mark. When we took a picture and they stood next to each other, I could barely capture them in the same shot. The contrast made the tall person look taller and the short person look shorter. Of course there’s no good and bad with height but I’m just saying that the contrast was clearer when they stood side by side.

Back to the Back to Back Story Method

That’s the strength of the Back to Back Story Method. Because your stories are essentially standing side by side, they make the contrast clear and help your audience more easily choose what to do and what not to do (or how to be or how not to be). Hopefully people will see my story and follow their own Sheen Factor. 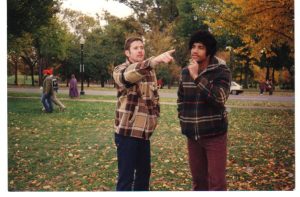 I was also a Production Assistant on Forrest Gump in 1994. Here I am in wardrobe for the scenes we shot in Washington, DC. That’s NOT my hair!

Do you currently tell two stories back to back that use contrast as a tool of influence? If so, what are you comparing and contrasting?

If you aren’t currently using this method, do you have two stories you can tell back to back to make a point? What would that point be?