Are you Using These 7 Irresistible Hooks in Your Speeches? 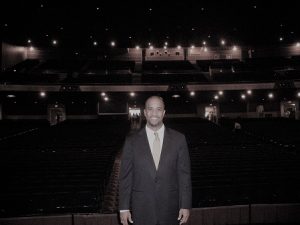 Getting ready to give the commencement speech to 4,000 people at a University of Phoenix Graduation

You have to find ways to keep hooking your audience so THEY don’t want to let go.

Below you’ll find 7 irresistible hooks (in no particular order of importance) that get your audience to say, “Tell me more” or “What happened next?”

I tell a story about how excited I was to meet my speaking hero. The only problem was, when I approached him, something unexpected happened. Listen here.

Did you hear the long silence? It was after I said to my speaking hero, “You’re the one who made me want to get in this business in the first place. Thank you. Thank you!” The audience laughed a bit because of my facial expressions and actions but, content-wise, it was still a silent moment.

That silence in the story becomes a hook because my audience is hungry to hear what he is going to say and then, when he doesn’t say anything, they’re ever hungrier to see what I’m going to do about it. The silent moment becomes the hook.

The problem with many speakers is they rush through the silence thereby making the potential hook much less effective. Take your time, dance in the silence, and watch your audience move to the edge of their seats. Remember…

“You can’t rush and resonate”

The Avoidance Hook focuses on something your audience wants to avoid. It’s important to use this type of hook because sometimes people are motivated by what they want to avoid more than by what they want to attain. If they pay attention to what you’re about to say, they can stay out of harm’s way.

Listen to how I quickly hook one of my audiences with something they want to attain.

The Attainment Hook is just how it sounds. You simply let the audience know what they can attain if they pay attention to what’s coming next. Think results-based. I mention that they’ll be able to make a deeper connection than they ever have before. That’s certainly something they want, but I make sure to tease them before I tell them. Don’t give it up too soon. Make them wait for it and want it. That way, when they finally get it, they’ll value it and enjoy it more.

That’s the effect the words “most people” have on people. For example, I used to tell my audiences, “Most people live their lives on get-set. When it comes to pursuing their goals and dreams, they take their marks, they get ready, they get-set, and they never go. They live and die on get-set.”

Because “most people” are two very persuasive words, my audience members get very motivated to “go” rather than to live on “get-set.”

That’s an example of a curiosity hook. You find ways to make your long road lead to their shortcut. After all, you traveled your long road for a reason, right? However, don’t tell them what they want to know…at least not immediately. Make them curious, tease them a little more, and then give them the tool (or solution, answer, or formula, etc.). Remember…

Let your long road lead to their shortcut

I often start off my keynotes with the following statement: “I was afraid to come here.” Listen to the effect this statement has on my audience. If you listen closely, you can even here someone say, “Oh no.”

The other day I spoke in Newport, Rhode Island to the US Probation Office and I started in this exact way. They laughed after I said I was afraid to come here. They wanted to know why. That’s the hook. Simply make a statement that makes your audience ask themselves a question. In this case, they should at least think, “Why were you afraid to come here?” That’s the hook.

In one of my first ever speeches as a speaker, I said to my audience, “Nobody has ever died from a snakebite.”

My audience wondered, “What’s he talking about? People get bitten all the time and I’m sure some of them have died.”

I then went on to tell them “It’s not the bite; it’s the venom that kills them.” I then related the venom to what happens inside of you when you don’t forgive those who have hurt (i.e. bitten) you.

The key is that the first statement hooks them in to want to know more. The rest of the story clears up and answers their questions. Remember…

“When all of your hooks are done, your speech is over”

Which, if any, of these kinds of hooks are you using? How have they been working for you?