From the following 90-second video you will be able to pick up at least 9 speaking DELIVERY tools you can use to lift every speech you give to new heights.

What you’re about to see is part of an opening to one of the three speeches I gave in Durban, South Africa in 2012. I suggest that you watch the video and then read the tools below and then watch the video one more time to help solidify what you read.

Super Speaking Tool #1 – Get them to verbally fill in the blanks. For example, I said, “Being the World Champion is a blessing and a __________).” They filled in the blanks with “curse.” This tool gets your audience involved and flavors the rest of the speech so that they think, “I better keep paying attention because he might want me to finish another of his sentences.” It’s a good idea to have them verbally fill in the blanks very early on and then they’ll be ready to do it throughout your speech.

If you do not get your audience involved early, they will not become involved later.

Super Speaking Tool #2 – Delivery-wise, do as your character does. When I say, “I was walking through the Chicago airport,” I literally start walking on stage with an invisible trophy in my arms. This helps bring your audience into your scene. Remember, speaking involves a series of scenes. Too many speakers simply state what they did without bringing you into the scene.

Super Speaking Tool #3 – Respond to their reactions. When I say, “Is that Denzel Washington?” I look at someone in the audience who is laughing a little too hard (or too loudly) and respond by saying, “You didn’t have to laugh that loud.”  That tag-on line gets another laugh but it also does something else that’s very important. It lets my audience know I am listening to them and makes them feel like it is a dialogue and not a monologue.

Super Speaking Tool #4 – Use Posture and Positioning. When I become the petite lady in the pink dress, what do I do? I change my posture to become shorter and then I slightly alter my voice so it’s a bit higher. However, everything you do delivery-wise, in speaking, should be subtle. Therefore, I start with the slightly higher voice (just to establish that she’s speaking) but I try not to make the voice so high that it becomes a distraction.

You can also see her looking up when she says, “Say some things.” That’s because she’s petite and she’s looking up at me. And remembering the previous Super Speaking Tool #2,  when I say, “She started reading the bottom of my trophy,” I do as the character does and simulate reading by using my finger to go across the words.

Everything you do delivery-wise should be subtle

Super Speaking Tool #6 – Wait for the laughter to hit the tail end before you begin to speak again. Watch again when she said, “Say some things” and see how I waited until the laughter had ALMOST come to a complete stop before I spoke again.

Super Speaking Tool #7 – Look for tag-on lines. Once the laughter from the “Say some things” line died down, I added a tag-on line of “And I was speechless!,” which gave my audience another laugh. That line was not in that story until about a year after I started telling it. When you tell your stories over and over and you record them, you will be able to listen to them and see where tag-on lines can give you extra humor or deeper profundity. Always continue to look for tag-on lines no matter how long you’ve been telling your story.

Super Speaking Tool #8 – Step up to your point. You’ll notice when I made the point, “Don’t get ready; stay ready,” I walked out closer to my audience. This is for two reasons.

One: I like them to know I am speaking directly to them in a conversational way and I can anchor that spot on the floor to hold those conversation if I keep going to it at the right time.

Two: It’s easier to see them nod their heads in agreement and easier for them to realize that I see them because I am closer to them. Again, you want to do everything you can to let your audience know you see them and you acknowledge them. That’s the key to making it feel like a dialogue.

Super Speaking Tool #9 – Whenever you use a handheld microphone like I had in the video, make sure you hold it in an effective manner. I have seen far too many speakers holding it directly in front of their mouths like they are about to sing. Instead, hold it beneath your chin so that it does not cover ANY part of your face. Much of speaking is said with your eyes and facial expressions so you cannot cover those in any way.

Say It With Your Face

When I was in Japan, I brought someone up on stage and he put the mic right in front of his mouth. Play the audio below to listen to what I told him. 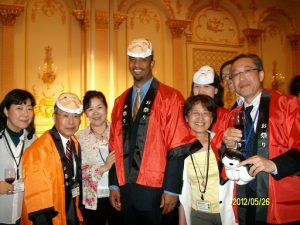 Everything you do delivery-wise should be subtle unless you are exaggerating for humor or for another strategic purpose.