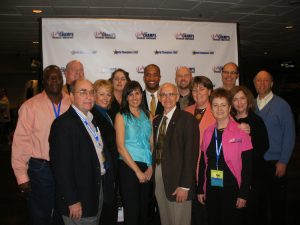 If you don’t have hooks strategically sprinkled throughout your speech, chances are your audience will bail mentally if not physically. You have to find ways to keep hooking your audience so THEY don’t want to let go.

Below you’ll find 7 super hooks (in no particular order) that get your audience to say, “Tell me more” or “What happened next?”

I’ve said to an audience of speakers, “How would you like a tool to make a deeper connection than you’ve ever felt before? If so, say yes.” They always yell, “YES!”

The Attainment Hook is just how it sounds. You simply let the audience know what they can attain if they pay attention to what’s coming next. Think results-based. I mention that they’ll be able to make a deeper connection than they ever have before. That’s certainly something they want, but I make sure to tease them before I tell them. Don’t give it up too soon. Make them wait for it and want it.

“Tease them before you tell them.”

When I used to watch the master presenters, I realized many of them made statements like, “Most people do this” or “Most people do that.” Whenever I heard those statements, I’d say to myself “I’m not going to be like most people. I don’t want to be average. I want to do something different.”

That’s the effect the words “most people” have on people. For example, when I say, “Most people live their lives on get-set. When it comes to pursuing their goals and dreams, they take their marks, they get-set, and they never go. They live and they die on get-set.”

Because “most people” are two of the most persuasive words in the English language, my audience members get very motivated to “go” rather than live on “get-set.”

Of course you can also be more specific by saying something like “most scientists” or “most musicians” or “most students,” based on who is in your audience.

I tell a story about how excited I was to meet my speaking hero. The only problem was, when I approached him, he said nothing back to me. That silence in the story becomes a hook because my audience is hungry to hear what he is going to say and then, when he doesn’t say anything, they’re ever hungrier to see what I’m going to do about it. The silent moment becomes the hook.

The problem with some speakers is they rush through the silence thereby making the potential hook much less effective. Take your time, dance in the silence, and watch your audience move to the edge of their seats.

The key is that the first statement hooks them in to want to know more. The rest of the story clears it up and answers their question.

When all of your hooks are done, so is your speech.

Would you like to generate significant income by helping people present with impact?

If so, register now to become a Certified World Class Speaking Coach. We only offer the program once per year and we limit enrollment to 25 spots so make sure you click here before the program it sold out. Join us for our 13th year!