4 Tools for The First Two Minutes of Your Speech 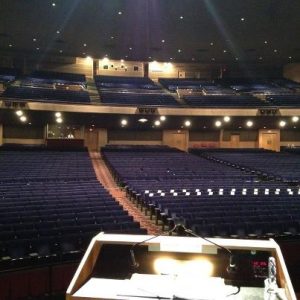 About an hour before I spoke to 3000 people in Columbus, Ohio

What you do in the first two minutes can absolutely make or break your speech. My number one goal is to connect quickly with my audience and I can do this using humor, curiosity, and involvement.

Click below to listen to the first two minutes of a recent 45-minute keynote speech I gave to a state Government agency in Maryland. After you listen to the audio, take a look below at 4 tools I used to connect early and make them glad they came. You can use them too.

4 Tools to Build a Connection with your first two minutes

One: Come out with something unexpected. My audience was probably expecting my first words to be something like, “It’s nice to be here…” Instead, I said, “Feel free to keep it going.” They laughed after six words and we started to build a connection.

Two: Startle and Wrap. “Startle and Wrap” means to make a startling statement and then wrap a story around it. For example, I said, “I was afraid to come here.” That statement should have lead to some curiosity so that my audience would want to hear what was coming next. Then I used that statement to springboard into a story about the letter my daughter had written me. My audience laughed again (at least 3 more times) and we continued to build our connection. Within the first 45 seconds, we had shared several laughs.

Other examples of my “Startle and Wrap” formula begin with statements like the following:

“Nobody has ever died from a snakebite.” Then I go into a story about the venom being what kills people.

“Most Toastmasters don’t like me.” Then I go into a story about winning the World Championship of Pubic Speaking in my first try.

The key is to use the startling statement as curiosity to set up the story. Startle and Wrap.

I focus on Aristotle’s emphasis of putting your audience into the right frame of mind. That’s my goal here and humor does that. My first few words are focused on their mindset more than my message.  My objective is to get them into a highly receptive state of mind. Otherwise it could be like trying to plant a seed into the concrete.

Also, my audience finds out something about me with my quick short story about my daughter. What do they find out?

Once I make fun of myself, it gives me permission to tease them a bit as the speech continues.

Three: Go into something spontaneous about them. In this case, you heard me give an impression of my audience members on how they reacted to being told to move up to the front of the audience. You couldn’t see it, but here is what I did.

Instead of moving up from the back rows to the front rows, I simply sat in one chair and slid the chair forward about half a meter. In other words, I teased them about the lack of effort they put into moving and, because it was true, they acknowledged and laughed at it (at themselves). As a result, we continued to connect. Still, all of this was in the first 90 seconds.

Why is it important to have spontaneity early on? Because it lets the audience know something a speaker should always want them to perceive and that’s this: “This is not a rehashed, rehearsed, off-the-shelf speech.” Instead, there is a flavor of customization which makes them feel like the speech is “just for us and just for now.”

Did you notice the placement of my spontaneous piece (i.e. in this case it was the piece about the moving of the chair)? I did it AFTER the proven piece (my daughter’s letter). Why? Because it’s unproven, which makes it more of a risk. I’m not 100% sure it will work. You don’t want to make the first thing you say the worst thing you say. Most of the time I like to start with something proven and get some momentum before jumping on a riskier spontaneous moment.

Four: Ask questions early. Get them involved very early on with questions that are NOT rhetorical. I really want answers because this flavors their involvement for the rest of the speech. Too many speakers wait too long to get their audiences involved. If you don’t get them involved in the first couple of minutes, they will feel, “Well, I guess I’ll just sit back and listen.” That’s putting them on the path of tuning out.

Plus, meeting planners love questions! More than a few have told me, “We want you as our speaker because we like the way you ask questions to get your audience involved. You don’t just lecture.” They see this on the videos and they like it. This method won’t only connect you with your audience, it can get you booked to speak to them in the first place!

Final Thoughts: After the Bang

You might be wondering, “What about setting up the structure for your speech? Doesn’t that happen in the opening?’’

Yes! That’s what comes next. The Bang (what you heard) is only one-third of the overall opening. After coming out with a bang for my first couple of minutes, I then set up my entire message by offering my Big Promise and the Roadmap they can follow. That completes my entire opening. That audio clip is for another day.

Note: The speech I gave in the clip above was a 45-minute keynote. If you only have 5 minutes to speak, you definitely want to get to your main message faster.