3 Sacrifices that Will Take Your Stories to New Heights 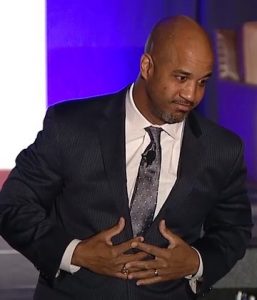 That’s right. To me, rhythm trumps grammar much of the time. The following are three sacrifices I suggest you make in order to take your speaking way past where most speaker will go.

One: Sacrifice your grammar for your rhythm

Watch the following few lines in one of my speeches:

What’s wrong with that line? Well, I said, “When we make excuses for someone, we invite them never to change.” That’s grammatically incorrect. Instead, I should have said the following:

“When we make excuses for someone, we invite him or her never to change.” This is because I am speaking about one person (i.e. .someone).

However, if I said it in a grammatically correct way, do you see how it would have messed up my rhythm? That’s why I choose to use “them” instead of using the phrase “him or her.” Grammatically it is wrong but rhythmically it is right.

Two: Sacrifice your grammar for your characters

I strongly suggest that you speak like you talk. If you are using words in your speeches that you don’t normally use when you talk, you aren’t being the real you on stage.

Here’s a surefire way to know a speaker is speaking like he writes rather than like he talks. He puts the narration at the end of the line of dialogue. For example, he says something like the following

Writing is very important in business, speaking, and in life. After all, if I didn’t write, you would not be reading this. However, it’s important to speak like you talk and not like you write. Speak your way into speaking. How? Write down an idea and start speaking extemporaneously about it. You will start to turn a mess into a message. After all, if you split up the words MESSAGE, you will just find a MESS with AGE. You have a mess that, over time, turns into a message.

Once you speak your way into that message, you can record it, have it transcribed (I use a great apps such as reflectly  and yoodli that automatically transcribe my thinking out loud) and then review it. This works well because you can now make tweaks to the page that will end up on stage. And the page started off as a spoken message.