20 Reasons Speakers do NOT Connect with their Audiences 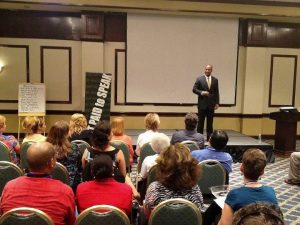 You might have the greatest content in the world, but, if you do not connect with your audience, it all goes to waste. That’s like being on the phone and having something very important to tell your friend but the call keeps dropping. No matter what you had to say will not get through.

However, by understanding what stands in the way of connecting with an audience, you can make small adjustments that lead to deeper and greater connections.

Below are 20 reasons many speakers never connect. I suggest that you take a look at them, see if you are guilty of any of them (I know I have been) and then have a discussion with another speaker about how you can avoid these mistakes.

20 Reasons Many Speakers Do NOT Connect

TWO: The audience is not sold on why they should listen to the speaker. Your bio, speech description, and introduction should clearly show the benefit your audience will get from experiencing your presentation. They should be excited before you even take the stage.

THREE: The audience is not sold on why they should take the next step the speaker suggests. If you do not sell the results (i.e. happiness, joy, money, saving time, reducing effort, doing more with less, recognition, etc.) they can get by following your advice, they will not act on it.

FOUR: The audience is given too many next steps to take. There’s an old saying that “A confused mind says no.” I’ve added to it that “A clear mind says go.” Giving one exact next step will help you connect with your audience during and after your speech. For example, in one of my speeches, I drive people to visit 52SpeakingTips.com and I stay connected with them. Because I don’t give several next steps, I can use my entire speech to build the case for getting them to take the one step. That’s powerful and clear.

FIVE: The audience does not feel involved. I remember watching the movie Lean On Me decades ago and hearing the line, “No involvement, no commitment.” That’s changed every aspect of my life. In speaking, people buy into what they help create so it pays to make them part of the speech creation.  How? Ask them questions. Get them into quick activities. Listen to them as you speak. Involve them in your stories. Jump on the spontaneous moments. Find ways to get and keep them involved.

In fact, here is a quick spontaneous moment I had with a speaker when I spoke at the NSA Convention in Indianapolis recently. It’s a 17-second clip but it certainly helped with the connection.

SIX: The audience does not feel this is the only time you have given the speech. In other words, they don’t feel it’s fresh. Instead, they feel like it’s something you’ve rehashed time and time again. Perhaps it is, but your audience shouldn’t feel that way. As a speaker, it’s important to find ways to make the speech fresh for you so it will be fresh for your audience.

I use what I call the Fabric Softener Approach. When you put a fabric softener (such as Bounce) into your laundry, it refreshes the entire load. In speaking, I rarely give a speech without trying out at least one new line or story. In doing so, that new piece becomes like the sheet of fabric softener and actually makes the entire speech fresh for me and that helps me keep it fresh for my audience. I also dedicate every speech I give to someone somewhere so that it’s just as important every time I give it.

SEVEN: The speaker is not all there. If you are not in your speech and your stories emotionally, you do not stand a chance in connecting with your audience.

EIGHT: The speaker has not done the pre-speech research necessary to meet the audience members where they are. Too many speakers give what they want to say rather than what the audience needs to hear. That’s a recipe for trouble.

NINE: The speaker does not match the energy of the audience. Have you ever seen a speaker come out way to energetic and loud for the laid back audience in front of him? Have you ever been that speaker? It’s not about bouncing off the walls. It’s about matching your audience members where they are energy-wise and then moving them to where you want them to be.

TEN: The speaker does not tease them before he tells them. Get your audience to thirst for your message before you quench that thirst. Otherwise they won’t value it as much and they won’t have enough curiosity to get connected in the first place.

TWELVE: The speaker does not respond (at least visually) to the reactions of the audience. There will be many moments in your speech wherein your audience members react in certain ways. If you just keep talking without at least visually acknowledging their reactions, then you will not connect with them. Instead, it will seem as if you could give the same exact speech without your audience even being there.  Speaking involves a back and forth flow of energy. Blocking that energy flow is like blocking the blood flow in a person. The results are disastrous.

THIRTEEN: The speaker tells us instead of taking us back to her story. Don’t tell us a story from the past, let us experience your story in the now. You can do that with dialogue, expressions, reactions, involvement, etc.

FOURTEEN: The speaker does not use relatable characters. If all your stories are about climbing Mt. Everest and doing things your audience has never done and never wants to do, you might have a problem connecting unless you have journey-related universal principles that can bridge that gap. I can remember speaking to a nursing home very early in my career and wondering, “How will older folks relate to me?” The answer is they didn’t have to…at least not directly.

I told stories about advice I received from my grandfather and they, being grandparents and great grandparents, related to him. So they related to me indirectly through my characters. I’ll take it!

FIFTEEN: The speech is a verbal autobiography and leaves the audience wondering what they should get out of it. Don’t make them work that hard. They need to know what they’ll get out of it and they need to know that from the beginning, not just at the end. The speech can’t be, “I did this and I did that and I did this…” and then at the end you say, “And you can do it too.” That’s not you-focused enough to connect. It needs to be you-focused from the very beginning. By the way, by “you” I mean the audience.

SIXTEEN: The speaker does not come out with a bang. You only have 30 seconds before your audience realizes whether or not they want to hear more. Make sure you make those 30 seconds count.

SEVENTEEN: The speaker sounds like another speaker. Be yourself or you’ll never connect. I remember watching a speaker who had great content but there was just one problem with his delivery. He had a fake southern accent. It seemed like he was trying to have a Zig Ziglar-type drawl and it completely destroyed his connection. Why? Because it wasn’t his way, it was Zig’s way. Only Zig Ziglar can be Zig Ziglar. The rest of us need to be ourselves on stage.

EIGHTEEN: The content is not original enough. As soon as someone starts talking about the starfish or the bricklayer, many people tune out and say, “I’ve heard this all before.”

NINETEEN: The speaker’s stories don’t stir anything within us. If stories are one-dimensional and flat, they will not stir any emotions in us and you will not connect. When I say “emotions” that does not mean it has to involve tears or regret, etc. Instead, it can involve happiness and joy. But it has to connect to some kind of emotion in us.

This is in no way an exhaustive list. What other reasons do you think speakers do not connect with their audiences? Have you been guilty of any of the above-mentioned mistakes?