17 Storytelling Ideas to Breathe Life Into Every Speech 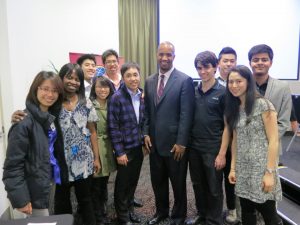 With a few audience members after sharing stories in Australia

You saw the title so let’s jump right in with 17 storytelling ideas that will breathe life into your speeches and keep your audiences engaged.

Idea Number One: Start your stories in different places. You don’t have to start a story at the beginning. You can start it in the middle or even at the end. For example, I could start a story like this:

“There I was, standing on stage with the 1st place trophy at the 1999 World Championship of Public Speaking. Life as a speaker was great! However, it didn’t start out that way. In fact, back in 1995…”

You can give the end and then work your way back to how you got there. Mix it up with each story. Don’t start them all in the same place.

Idea Number Two: Keep your audience curious from the beginning. What questions can you plant in the minds of your audience members that they’ll want answered during the story? For example, I start off one of my stories with, “You might not have realized this but…I’m black. Hold on, let me tell you how I found this out!” Along with uncovering some humor, this line makes my audience curious as to what happened and, therefore, they’re happy to come on the journey with me.

Idea Number 3: Get to your stories quicker. There’s way too much set-up (what I call “pre-ramble”) for many of the stories I see. Get to the story quickly and then go rapidly into the conflict.

Idea Number 4: Take your time between your lines. That’s where the story lives…in the space between the lines. Don’t rush to get to your next line. Instead, find ways to milk the line you just gave. In several of my stories, the majority of the laughs come from the looks rather than the lines. However, you have to give yourself space for that.

Idea Number 5: Condense to connect. When you give a scene with two (or more) characters talking in dialogue, don’t tell us everything, just tell us something. Try not to go back and forth between characters with lines of dialogue more than 2-3 times. Otherwise, your audience will quickly grow tired. Instead, put all of the important statements in no more than a couple of lines of dialogue.

Idea Number 9: Show the emotional change in your character AFTER you overcome OR transcend your conflict. No change, no story.

Idea Number 10: Realize it’s the looks you give before, during, and/or after the lines that really tell the story. Or as my friend, Darren LaCroix, says, “Reactions tell the story.”

Idea Number 11: Make sure you have a Foundational Phrase that your audience can easily remember and repeat. It should be rhythmic, you-focused (meaning audience-focused), and preferably fewer than 10 words. For example, one of my foundational phrases is, “Don’t get ready, stay ready.” My audiences can use that phrase as a guide moving forward.

Idea Number 12: When delivering the lines of your characters, use their posture, positioning, and a “slight” change in your voice (whether it’s pace, pitch, volume, etc.) to make that person come alive and be different from the other characters. For example, you might have a character that is stern and so he has a very stiff posture and possibly crosses his arms and frowns when he talks.

Idea Number 13: Be subtle with everything you do delivery-wise. For example, you don’t need to speak with a child’s voice when delivering the lines of a child. Instead, speak with your voice (with maybe a little higher pitch) but deliver it with the child’s expression. He or she can also look up to show that the child is talking to an adult.

Idea Number 14: Come out of your story to talk to the audience. Remember, you are NOT doing a stage-play. You’re supposed to be having a conversation with your audience. When you get into a story, you don’t have to lose that conversation. Instead, mix the story with the conversation. For example, I have a story that goes like this:

“You should have been with my wife and me 11 years ago as we took our 6 month-old daughter, Tori, to the doctors. Raise your hand if you have kids? Great, then YOU know the doctor is going to measure her length and her weight…” Even though I already started my story, I looked to find ways to keep bringing my audience members into it. I call these “You-focused check-ins.” They keep the audience on their toes because, instead of being passive spectators, they become active participants.

Idea Number 17: With a few exceptions, keep your stories short. The longer you work on a story, the shorter it should get. I try to keep most of mine under 4 minutes.

There you have it…17 storytelling ideas that will breathe life into every speech.

What are some ideas you have that have helped with your stories?